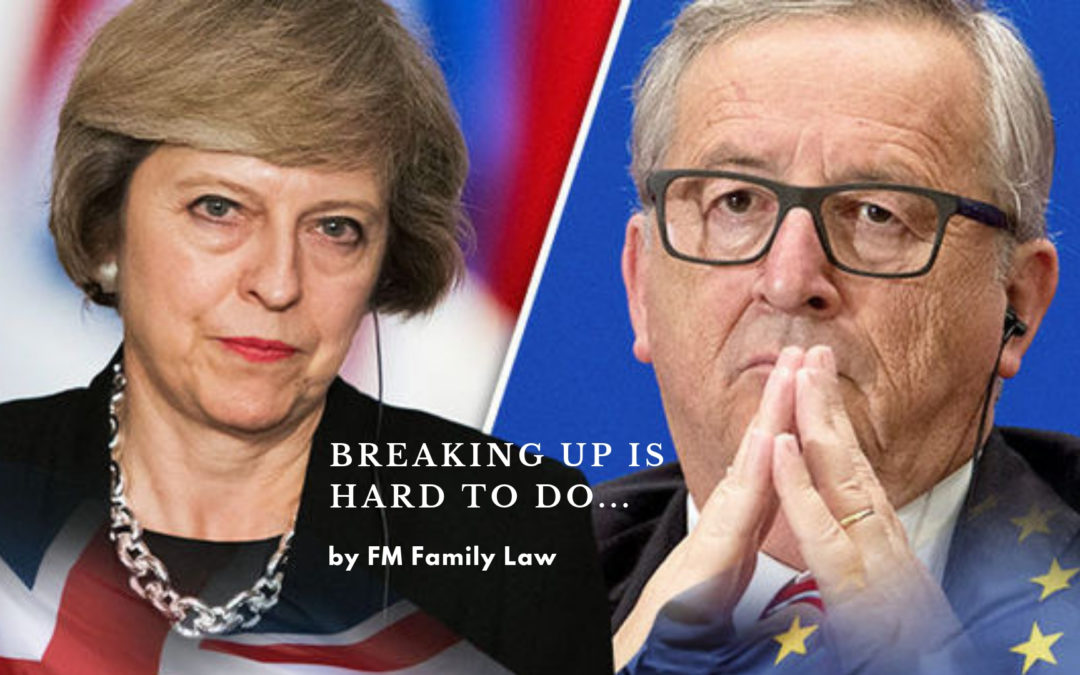 24thJune 2016 – The day I learned a separation was inevitable.

I knew, when I woke up that day that things had changed forever.  Sure, we hadn’t separated legally or financially at that time but I knew our relationship was over. I had no choice than to leave you. It was over.

I also knew there was so much to sort out. What was that feeling?  Bewilderment? Fear? Regret? Excitement? A new future…almost in reach?  Confusion? Sadness? All of it…

Sure, our relationship was far from harmonious – some people didn’t even know we were on the rocks. When the end did finally come, we were as shocked as everyone else. [Guardian, UK votes to leave after dramatic night divides nation]

Initially perhaps I was still in denial. Couldn’t we still make it work? What about all the good times – all the things that we have in common. Our fisheries! Our agricultural policy! Maybe it was just a phase.  Maybe we could still change our minds [BBC News, Brexit Ruling: UK can cancel decision, EU court says].

Maybe with third party help, we could get through. We did try to renegotiate our terms, to fix what was broken. But you just couldn’t change. [The Independent, What Cameron wanted – and what he really got]

It’s tough that only one of us made the call to break up, and it’s fair to say that this has made reaching a divorce agreement a slow and painful process.  Our lives have been intertwined for so long that it’s hard to picture going it alone. I’m scared. I don’t have a choice now as I’ve made the decision. I can’t turn back.  I’m nervous yet I’m making myself feel better with thoughts of a clean break, new opportunities, and a fresh start. No more shared responsibilities… the freedom to make new relationships – it’s all in sight! Or is it?

We are still so entangled. We live and work so close to each other that we’ll still have to be neighbours, and cross each other’s paths a lot. Sure, we’ll put the kids first and share custody. Our financial responsibilities to each other still have to be fulfilled [Financial Times, Brexit Divorce Deal]. We’ve made contributions to each other in different ways over the years. It doesn’t end just because I have stopped loving you

But maybe it’s better this way. Staying at arms’ reach. Over time, perhaps our relationship will flourish with a new mutual respect for each other. We’ll have space. We can spend time with other people. After all, I’ve always considered myself a ‘free trade agreement’ kind of a guy [David Davis in Conservative Home].

Yet I worry that this isn’t going to be the clean break I thought I wanted. We like the same things. I stopped loving you but we like doing a lot of the same stuff. What if we still want to go to the same places on holiday?  Can I still use your parents’ house in St Tropez? Can we make these things work even if we are not together? [Independent, Brexit Travel Advice]

Perhaps we should let the lawyers sort it out. I feel safer letting them take control, but it is expensive and I am worried I won’t be fully in control of the decision making process. I’ve heard such good things about dispute resolution options. It doesn’t have to be hostile. We can learn a thing or two about @ResFamilyLaw (www.resolution.org.uk) approach to conflict resolution. Should we mediate (www.familymediationcouncil.org.uk)?

Okay. So now we’re talking. We are looking at options and we are striking a deal. The negotiations have been long and hard. I feel worn out. I started out so tough yet now… everything you’re asking for… maybe you should just have it. Okay, I’ll admit it. I do feel a sense of culpability, leaving you like this. When we initially sat down and wrote a budget together, I was part of the household [Financial Times, Brexit Divorce Deal].  I know my responsibilities and I am prepared to deliver. For the next few years I’ll still have to contribute my share as if I had never left. And I’ll give a lump sum too, just for good measure. I have to make amends. I feel it’s all my fault.

But now there’s a backlash. My family aren’t happy. They say I’ve given too much away! Everyone is rejecting our deal. My Irish family are threatening to walk out, [The Guardian, DUP Threaten Sabotage] even though I’ve paid their bills for the next 5 years. But the house will fall down without their support… I need them to keep up the numbers, or it’s just me and the kids [BBC, Hung Parliament].

My financial planner says I’ll be poorer without you, and there’s much uncertainty ahead [Evening Standard,Britain will be poorer].  But there’s no turning back: I’ve made up my mind.

Time has passed. It is taking too long, we couldn’t come to an agreement and asked the court to decide. It’s cost me so much so far and I know there is more to come but we just don’t seem to be able to come to an agreement.  I’m told this is the ‘only’ way if we can’t agree and yet I am still so scared. I feel helpless and at sea. I’ve taken a path and I have to follow it.

The day of final judgment looms.  If we don’t reach an agreement by 21stJanuary [Financial Times, Brexit Timeline] the court will decide. I’m told that neither of us are bound to be happy if we have to get someone else to decide for us.  No one said this was going to be easy [BBC News, EU Trade deal ‘easiest in human history’ says Fox].

I feel we have to get back to the negotiating able. Is it too late? Could we try another face-to-face meeting to try and salvage something? [CNN, EU tells May the deal is not up for renegotiation] That’s got to be a lot better than someone making a final decision for us.

Is it too late to try another process like arbitration www.ifla.org.uk? My advisors tell me it’s the future of conflict resolution when all else has failed. So much more efficient than court, all the technical skills, nowhere near the cost and a speedy decision that we both have to abide by. Why didn’t we try that sooner to save all this pain and cost?

I’m a mess. I’m broke. It’s cost me so much. I felt in charge and now I don’t know which way to turn.

Why won’t you answer my calls?